BOSTON, MA – On Tuesday, Senator O’Connor (R-Weymouth) and eight of his colleagues in the legislature submitted a letter to Department of Energy Resources (DOER) Commissioner Patrick Woodcock urging DOER to reform its proposed biomass regulations. The Department’s proposed regulations, which will come before the Joint Committee on Telecommunications, Utilities and Energy for a public hearing on July 30th, would remove Renewable Energy Certificate (REC) tax incentives for biomass facilities sited within five miles of Environmental Justice communities.

The legislators say that although well intentioned, the proposal in turn encourages biomass facilities to relocate or site new facilities in just 35 towns across the Commonwealth.

“Excluding 10% of our communities from these protections would be patently unfair,” said Senator O’Connor. “These biomass companies would be incentivized by renewable energy subsidies to establish or relocate their facilities to these municipalities – including on the South Shore and large parts of Western Massachusetts – and potentially create a significant health risk to those communities.”

The areas in white in the map below showcase the parts of the state that would keep the tax incentive in place: 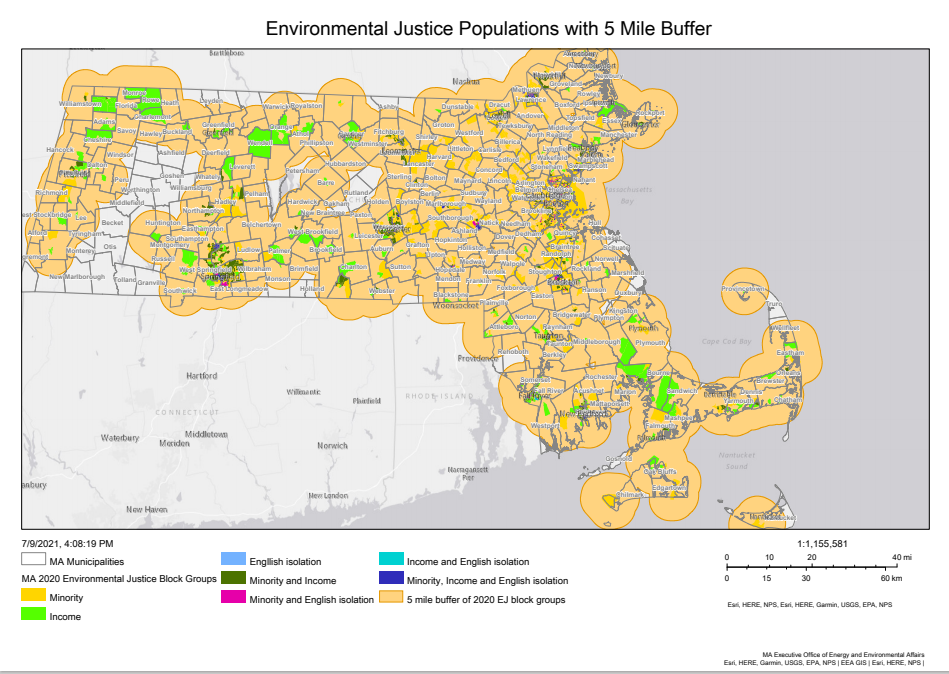 Biomass is used for facility heating, electric power generation, and combined heat and power. The term biomass encompasses a large variety of materials, including wood from various sources, agricultural residues, and animal and human waste. Biomass can be converted into electric power through several methods, the most common of which is direct combustion.

The letter notes that “larger scale REC-eligible biomass power plants would burn about 1,200 tons of wood per day, emitting masses of soot and harmful pollutants into the air of surrounding communities, exacerbating existing consequences of poor air quality, such as asthma and other respiratory ailments.”

“It is evident that we as a Commonwealth are taking a stance against damaging or hazardous biomass production,” the legislators continued. “We believe the logical and desirable conclusion to these efforts is to uniformly eliminate new biomass from all RPS Class I eligibility, providing the same protections to all Massachusetts communities, including these ‘exception’ communities.”

Senator O’Connor was joined in signing the letter by Senators Comerford, Hinds, Feeney, Velis, and Chandler, and Representatives Howitt, Blais, and Pignatelli.

Senator Patrick O’Connor represents the Plymouth and Norfolk district, which includes the towns of Cohasset, Duxbury, Hingham, Hull, Marshfield, Norwell, Scituate, and Weymouth. Sen. O’Connor and his staff may be reached at the State House at 617-722-1646 or by email at Patrick.O’[email protected]